Just when I thought that the Australian Labor party couldn’t sink any lower into the quicksand of irrelevancy they manage to submerge themselves yet again.

“The reality is … only about a third of the parents put some sort of blocker in relation to the sites on their home computers, it’s too hard for most of them but if you did it at the level of the provider, probably very few people would opt in.” -Kim Beazley.

Why do parents not bother Kim? Maybe because by and large parents aren’t concerned enough to monitor (actually or electronically) their children when they surf the net.

The greatest offensive content out there now is the pathetic, irrelevant excuse for an idea that Kim believes passes for opposition policy. 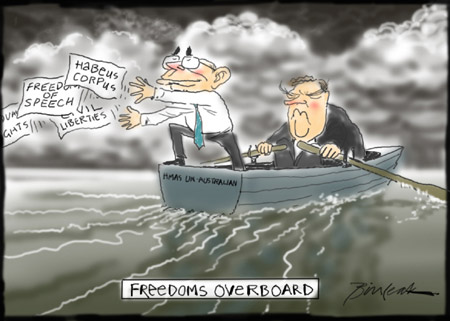 This entry was posted on Tuesday, March 21st, 2006 at 9:53 pm and is filed under Political. You can follow any responses to this entry through the RSS 2.0 feed. Click to leave a comment.

18 Responses to “Tough titties for ‘tweens”