As is usual, on my drive home from work, I listen to PM on ABC Radio National. If it’s a late night I catch the repeat an hour later on my ABC Local Radio.

Used to the polished, experienced and all round in-control HoWARd for what seems an eternity, had me changing lanes with glee as I heard what can only be described as the PM sounding uncharacteristically tetchy.

“I think Mr Rudd is striving for a daily mantra without much regard to the consequences of what he says. He didn’t do too well with that farmer today.” – John HoWARd

Can it be that Rudd and Gillard and the polls and possibly even Amanda’s song with reference to first Australians, peace and multiculturalism has unraveled this consummate politician to the point where a girl like me can be a touch hopeful for a change of government which may be as early as August?

I sure do hope so.

“Indigenous Australians were here first, we are an immigration country, freedom is what we’ve enjoyed all our lives and we are under southern stars – everyone knows the Southern Cross,” -Senator Amanda Vanstone. 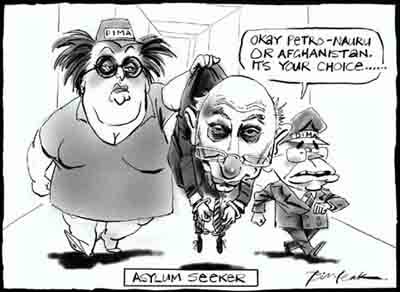 This entry was posted on Tuesday, February 6th, 2007 at 5:31 am and is filed under Life; barely possible. You can follow any responses to this entry through the RSS 2.0 feed. Click to leave a comment.