All last week it’s been it goes to his character from the government, when we ask why we should take an interest in the character assassination on Kevin Rudd and who he has dinner with.

Then came news of Ian Campbell and his meeting with Rudd’s dinner man. Then we heard of Santo Santoro’s shares in a biotechnology company.

Our PM had earlier this week sacked Campbell and defended Santoro over news he had failed to disclose a share deal which had a conflict of interest with his portfolio responsibilities for the aged.

“I do not believe that the failure to get rid of these shares was… and other matters relating to them was anything other than inadvertent. Once the failure to expose them entered his (Senator Santoro’s) consciousness and he became aware of it, he took immediate steps, and he was quite open. And he got rid of them and profit was made, but it was not retained and he donated the profit to a charity. And I think that was the right thing to do.” – John HoWARd.

“There is no excuse for somebody not complying with the rules. I can accept you can overlook one, but you can’t overlook a score or more, no-one is going to believe that and he (Senator Santoro) doesn’t claim that.” – John HoWARd.

So, as I understand it, and analysing HoWARd’s logic and behaviour, he does not actually value rules, or codes of conduct. He operates on a Can I/we get away with it’ mentality. If that falls over there exists an arbitrary, unknown number where the ‘no excuses’ rule has to kick in.

Well it’s either that or John HoWARd is a poor judge of character.

Either way, I have seen enough of John HoWARd’s character to say no thank you. 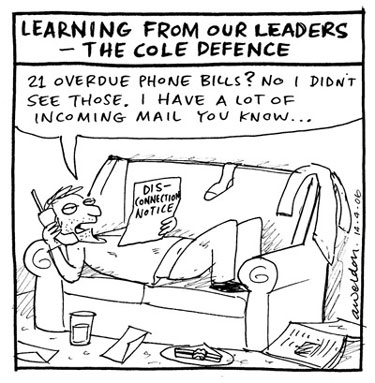 This entry was posted on Friday, March 16th, 2007 at 11:11 pm and is filed under Political. You can follow any responses to this entry through the RSS 2.0 feed. Click to leave a comment.