How can a country allow someone as incompetent as the Foreign Minister Alexander Downer to remain in charge of anything more than a mobile dog wash?

Recidivist dismisser Downer is at it again. His only response to dissent is dismissal. Following, please find evidence of his most recent dismissive-ness and add it to his litany of offending behaviour.

AID/WATCH is a not for profit activist organisation monitoring and campaigning on Australian overseas aid and trade policies and programs. They ensure aid-funding reaches the right people, communities and their environments.

“Far from protecting Iraq’s own food security, which was the stated objective of Australia’s aid mission, Australian officials paid by AusAid focused on guaranteeing ongoing wheat contracts for Australian companies and removing subsidies and protections for Iraqi producers in ways that gave considerable advantages to Australian farmers.” – Flint Duxfield.

A spokesman from Mr Downer’s office dismisses the report and says:

“Aid Watch is an extremist organisation that has repeatedly misrepresented the nature of Australia’s aid program. Mr Downer does not take the report seriously.”

Back on 02/10/06 Downer dismissed the findings from the Lowy Institute that found that 84 per cent of respondents believed the US-led invasion into Iraq, had done nothing to lessen the threat of terrorism.

“The problem with the poll is that they’ve [the Lowy Institute] clearly decided there are certain answers they’re looking for instead of trying to look at the totality of the issue. The Lowy Institute chose not to ask the central question, and the central question is should we now and should the Americans now surrender to the terrorists in Iraq, or should we stay the course? And the answer to that, I think you’ll find, is that most Australians think that (Opposition Leader Kim) Beazley’s policy of surrender in Iraq is a policy of defeatism, and most Australians would reject that.”

Previously, on 12/04/06, Downer dismisses as insignificant three separate reports that Australian wheat company AWB Ltd paid more than $200 million in kickbacks to Saddam Hussein’s government; testimony comes as investigation, now in its fourth month, focuses on what government knew about the kickbacks.

“This is unassessed intelligence from foreign sources. This isn’t Australian intelligence.” – Source.

Prior to that, in a white paper on terrorism- ‘Transnational Terrorism: the threat to Australia’ launched publicly by him on 15/07/06 is quoted by the Islamic Human Rights Commission (IHRC) on 04/08/06, as having said,

“Downer dismisses as illusory the notion of root causes of terrorism. Poverty, disadvantage or hopelessly entrenched political impasse have nothing to do with terrorism: they are all of them in any case long-running and endemic features of life throughout the Middle-East.”

Serial offender Downer, on 13/03/05, in response to the $1 billion Australia has pledged in Tsunami aid, amid warnings that the money could turn into boomerang aid– where the cash ends up in the pockets of wealthy Australian companies, said this:

“A spokesman for Downer dismissed the claims as a hoary old chestnut. We are making sure this money is spent in an effective and accountable way.”

Habitual dismisser Downer, on 23/08/04, Downer dismissed newspaper claims the Australian government was repeatedly warned its support for the Iraq war would impede the fight against terrorism. 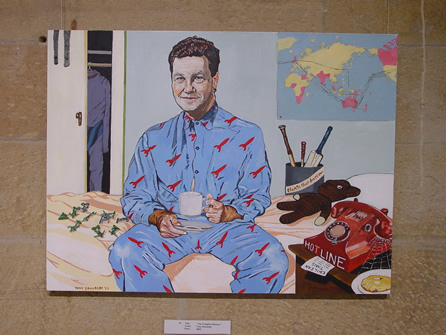 This entry was posted on Saturday, August 4th, 2007 at 10:57 am and is filed under Political. You can follow any responses to this entry through the RSS 2.0 feed. Click to leave a comment.