What will be said of this dissenting voice? Dementia? PTSD? No recent battle experience?

HoWARd would do well to heed and consider the voice of a former soldier who is drawing a comparison between Iraq and Vietnam.
Talking to commercial radio Major General Stretton said,

“Australia should not have been involved in Iraq in the first place as there were no weapons of mass destruction and no links with al-Qaeda. The whole lot of it has turned into a bloody civil war. All we are doing is reinforcing disaster. I just cannot understand it.”

“You would have noticed the prime minister use a new word … tilting. That is the same as the graduated response in Vietnam. In other words you just put a bit more in to stop it tilting the wrong way. It will end up exactly the same way. The whole thing is flawed strategy.”

“This talk about fighting for democracy, that is absolute, to use a phrase, bullshit.”

HoWARd had this to say in response to the Major General’s comments,

“I don’t think it is at all likely that we will send any more people but I am not going to get into this business of giving absolute guarantees and having everything I say on that analysed in the future.”

Too late Johnny, we’re onto you and we’re counting your lies. 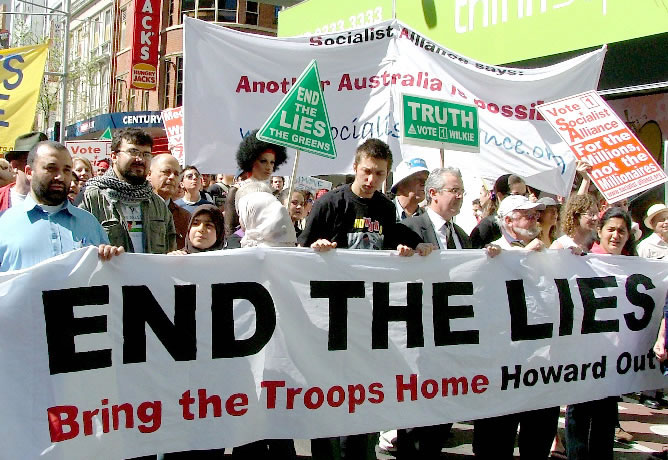 This entry was posted on Thursday, February 24th, 2005 at 6:01 pm and is filed under Anti-war, Political. You can follow any responses to this entry through the RSS 2.0 feed. Click to leave a comment.