Deep down in the document is a worrying paragraph for an old cynic like me.

Most full time positions have a period of probation usually lasting 12 weeks. It represents a reasonable timeframe for an employee to decide if the employer is right for them and vice versa. If I was a probationer do I interpret WorkChoices as advocating for probation to be extended to more than 12 weeks? Or does it mean that a probation period will not be worth the stress and uncertainty that it can so often be as at the end of 12 weeks an offer of permanent employment is no guarantee of ongoing employment. Only at the completion of six months can WorkChoices cover a worker new to the enterprise.

Will we be seeing a new form of casual worker? The worker who is employed with the expectation of permanent employment, works diligently for 23.5 weeks and then is “let go.” I wonder what the financial, physical and mental health implications of a fair dismissal might be?

I would rather the government spend the reported $12 million $15 million $40 million $55 million the WorkChoices advertising campaign is going to cost on mental health services for all the physically and psychologically hurt workers of today (and no doubt) the future.

Workchoices is skewed toward the employer and against the employee.
I suspect HoWARd subscribes to the Henry Ford school of logic, 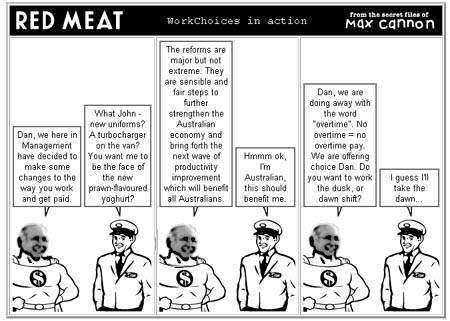 This entry was posted on Sunday, October 9th, 2005 at 7:00 pm and is filed under WurkRites™. You can follow any responses to this entry through the RSS 2.0 feed. Click to leave a comment.