In the US, the Maine National Guard is using a unique method to help families connect to their loved ones deployed in Iraq. They’re life-sized cardboard cutouts. If your father (or mother) is deployed in Iraq, you can get a Flat Daddy to help keep the absent parent involved in family life.

“Many military units can provide families with a life-size cardboard cutout of their overseas warrior. The family can then take that figure to parties, put it in the passenger seat of their car, take it to bed or do whatever it is that families want to with a replica of their loved one. Named after Flat Stanley, a children’s book character who was squashed flat, the cutouts have been a surprise hit since they were introduced. In Maine alone, the state’s National Guard has given out more than 200 Flat Soldiers since January. Experts believe the cutouts are a useful psychological device, especially for children, that helps cope with the stress of long absences. It allows the family to genuinely feel the missing person is still involved in day-to-day life.”- Source.

In NSW, we have just had a state election where the winning Labor party Premier Morris Iemma, amongst other things, stated that the Coalition government’s WorkChoices campaign was a factor in their loss.

I want the federal Labor party to start giving out Flat Daddies and Flat Mummies to any children that tell a caregiver, teacher, Nanna, Pop, or friends that they miss their working parent, be they in or out of the military, and they don’t get to see enough of them. I want this done to highlight just how little work/life balance WorkChoices legislation affords the working parents of Australian children.

It would also remind Australians, in an election year, that we are still in an illegal war in Iraq! 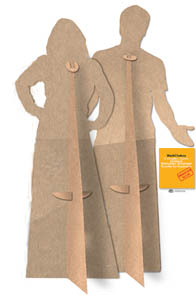 There was no doubting that on a good day, the former leader of the ALP, Kim Beazley, could produce a stirring speech.

Kevin Rudd has recycled one of Kim’s gems regarding the WorkChoices legislation announcing that he will,

“Consign these laws to the dustbin of history. If you vote for a Labor government, we will get rid of them (the new workplace laws) forever and for good,” – Kevin Rudd

Kevin’s previously ‘soft’ stance on WorkChoices legislation is believed to have been changed by recent studies reporting that,

“Women and casual and part-time workers on AWAs get, on average, up to $4 an hour less than workers on collective agreements.” – Source.

A Queensland study of 300 upper to middle managers, 88% felt there should be protection against unfair dismissal. It is interesting to consider whether these managers are protecting their own jobs or those of their subordinates. I would suggest it’s a bit of both.

Professor David Peetz is an academic, whose industrial relations research is certainly worth considering, except of course unless you are everybody’s simple uncle J Ho. Thankfully, Kevin Rudd is a considerably more astute politician than the Minister for Employment and Workplace Relations.

I am not convinced that two dustbins are enough to contain the refuse that is WorkChoices legislation. I could certainly hear the phrase “consign these (WorkChoices) laws to the dustbin of history” again and again before this year’s election.

The exchange of labour for money; work.

I have been offered a new job. It is in my field, but would involve a 10% drop in wages as this organisation’s employee agreement is not as generous as my current one. Unlike other new jobs, this one filled me with all sorts of ethical dilemmas when it comes to my contract, as the organisation states:

“Successful applicants may be offered an Australian Workplace Agreement (AWA) with an attractive package.”

I have to consider what my values are worth. Can they be bought off for say, 10 – 20% more money than what an employee’s certified agreement offers?

What value can I put on a supportive, hi-tech, forward-thinking workplace, with fascinating projects where management say fuck like the rest of us?

How could I attend my union rallies knowing that I campaigned AGAINST AWA’s way back when Peter Reith and Cheryl Kernot got together and did a deal.

What if I take the extra pay and donate it to a good cause?
I am excited about my new, extremely complex and interesting work and will say “Yes please.”

Now for the navel gazing… 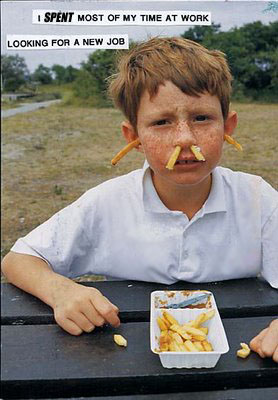 We are human! resources.

In the current political climate of WorkChoices and tolerance fatigue, can I just underline that underneath our uniforms, we remain human beings deserving of dignity, respect and a living wage. 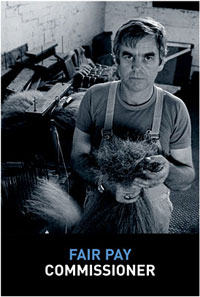 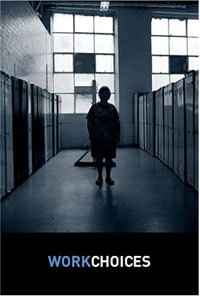 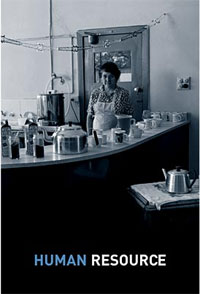 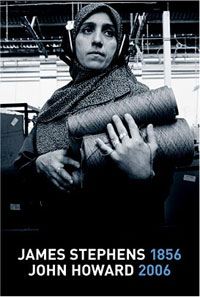 You are currently browsing the archives for the WurkRites™ category.