As of today there is a gasbags-shaped hole in my Universe.*

I am now in my mid 50’s and so are most of the friends that I made when I was little.
Today my kind and thoughtful stepmother gently let me know that my very best friend from when we were both aged 4 has died.
By way of explanation; my mate Moi was intensely private, complex and reclusive.
For some years now we had lost touch as she was battling a very aggressive cancer with what I can only believe were the wrong weapons. These being- Jesus, wholefoods and positive thinking. Turns out that there really can be no Atheists in a foxhole. My beliefs and presence did not support her wishes and I respectfully and regrettably left the Base Commander to fight her war.

Moi and I became close friends as our thoughtful kindergarten teacher- Hannelore Imberger knew that Moi’s house could get a bit rough and I did not have a mother. She felt we needed extra special care during the school holidays so she organised for us to go to her and her husband’s farm, next to the creek on Piggy lane in The Basin.

Moi, ever brave and protective, made sure I was not stepped on by Sampson the massive horse that lived on the farm.
I felt safe.
As a child I had Enuresis (bed wetting). I remember it was worse when I was not at home and I developed enormous shame and embarrassment around it. At the farm in Piggy Lane, I wet my bed a lot. Moi would quietly help me wash the sheets and put on fresh ones.
I felt accepted.

We went to the same school for a long time and remained friends. Throughout that time we tried to protect one another as we navigated the hell that is high school, teenage peer pressure and in/out groups. I was shunned/bullied as I was a hippy, nerd, geek, dag, kraut. Moi was shunned/bullied as she was a lesbian, nerd, geek, dag, kraut and as we found out many years later- bi-polar.
I know it was harder for her.

Moi responded to her struggle with life, the universe and everything like many teenagers do and abused pretty much everything she could get her hands on.
She took too many risks.
She took too many drugs.
She grew exceedingly angry. That included rage towards me and my desire to remain her friend.
We lost contact.

I changed schools for year 11 & 12. I started and finished a Floristy apprenticeship. She started and finished a Wool Classing and Sheep Shearing course.
Years went past with little contact.
The sheep of King Island had great hair cuts and the people of Darwin received beautiful bouquets.
I had become a mother to the beauteous and smart girlchild.
Moi had her heart broken over and over again.
We knew of each others’ existence through family and longed to reconnect with one another. Ours was an unconditional friendship, but neither of us remembered how to step onto that overgrown and ancient path. Was it even capable of holding our combined sorrows, hurts, scars and baggage?

Moi was one of 4 children. Two of her brothers were killed instantly in two separate motor vehicle accidents. One in 1979 (aged 22) and the other in 1985 (aged 27). In 1985 I was still living in Darwin and Moi was still in Melbourne.

After her brother Gerald was killed she went off the grid. I knew there was no point in reporting her as a missing person. I knew she was lost and she did not want to be found.
Weeks later she turned up in Darwin, at my door-  thin, tired and wet. She did not think it was at all remarkable or impressive that she had hitchhiked her way from the bottom to the top of Australia with little more than a pouch of Dr. Pat (tobacco), rolling papers and matches.
She stayed with me and the girlchild for some time. She walked on beaches and in bushland. She ate Mangoes and Laksa. She lay under the tropical sun. The warmth appeared to soothe her deep, deep wounds. We both knew that the scars would fade; yet remain visible. That said; her suppuration eased.
Moi left Darwin as she came. Without notice and on her terms.
I missed her all over again. 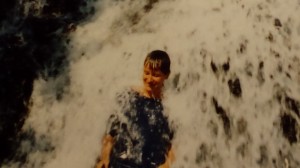 We kept in touch, but many more years went by where our lives did what lives do. She flew to Europe with her bicycle and rode it through the Pyrenees. I became a single mother.
Around age 14 the girlchild wanted to live with her father, in Queensland, for a year. This was explored and discussed and off she went. Just days prior to her flight, my mate Moi arrived in Darwin. Turns out that Moi had come to keep me company as she knew I “would be a puddle” as I adjusted to the ‘girlchild-shaped hole’ in my Universe.
She was right. I appreciated her being there.

When we were young and used to go out to the Upper Gully pub to see The Angels play and some idiot would hassle us as he invariably thought we were a lesbian couple and wanted to get himself immersed in us and his lesbian fantasy- Moi would, in her dramatic Contralto tone let loose with “unless it’s 12 inches on the flop we’re not interested.”
No one ever came back from that one!  🙂 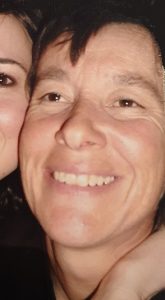 *With thanks to Arundhati Roy

You are currently browsing the Suki Has An Opinion weblog archives for March, 2015.