I have been watching Kevin Rudd intently and frankly, I have been concerned about some of his statements.

Today, all that changed, when I heard how forcefully and naturally Kevin spoke about his wife- Therese Rein, her business, women, work and the realities of interpersonal relationships in the year 2007.

“The reality we are dealing with here is this is the age of professional women who run their own companies who have their own lives and are not simply the appendages of middle-aged men.”-the PM in waiting.

I had no idea I would be so pleased to hear this level of sincerity, in what, sadly, seems to be a radical view of women in society, coming from the mouth of a politician.

I guess it takes me back to the insufferable ritual the meet and greet with our current PM and his wife used to be. Thankfully my current work is nowhere near as ‘sexy’ as previous roles, and I am spared the cringe-inducing spectacle that is the PM and Mrs HoWARd.

At every meeting with Mrs Janette Howard, she was an insipid, beige-y, girdled, dour, lightweight, appendage-like chore of a woman.

Kevin Rudd is all the more attractive, now that I know that he is the appendage of Therese Rein. 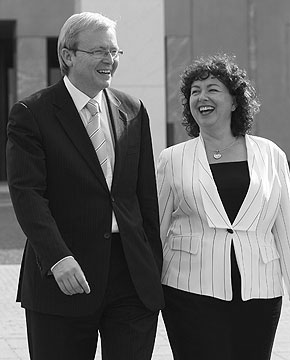 There has never been much doubt in my mind that Christopher Pyne is quite dim.

I used to love watching him in the days when, on Friday Forum, Lateline would pitch him against Mark Latham. Oh my, there were times when I even felt a little sorry for the pitiable, petulant, naive and bewildered Liberal Federal Member for Sturt. Today is not such a day.

Today, I am horrified at how very little the former Parliamentary Secretary to the Minister for Health and Aging knows about drug misuse, drug abuse, drug addiction, rehabilitation and wellness. Christopher Pyne has come out today suggesting that Ben Cousins should speak out in support of the federal government’s war on drugs.

“Having been given a second chance and been through rehabilitation, it would be, I think, appropriate for him to join the government’s tough on drugs campaign, because young people in particular will be watching to see what he does in the future. One way to assist those young people would be for him to join the campaign against drugs. A person like Ben Cousins who has admitted to drug use and been rehabilitated can talk with first hand knowledge of the dangers and downsides of drugs use.” – Christopher Pyne.

This is what Brendan Gale– Chief Executive of the AFL Players’ Association had to say specifically about Ben Cousins and illicit drug use in general:

“If a person is apprehended, dealing or using illicit drugs, he’s dealt with under the illicit drug policy, and that is, it’s a diversionary approach. And the focus is on education, rehabilitation, rather than putting him in the criminal justice system. […] but as far as illicit drugs with no performance enhancing effect, where there’s a health issue, and a welfare issue, we provide a medical response, not a punitive one. And that is consistent with all the States and the Federal governments drug diversion principles and that’s something that all experts agree is the best way to change behaviour.”

Then we have Medical Director of the Victorian Addiction Centre- Professor Greg Whelan advising that Ben Cousins’ is at a crucial time in his recovery.

“This (recovery from addiction) is a lifelong problem, just the same as asthma or arthritis or diabetes or oppression are lifelong problems. The biggest risk is in the first three months after people start their treatment, because we know that statistically that’s the time that they’re most fragile and most likely to relapse back to where they were before.”

I’m certain that the Minister for Aging hoped that Ben Cousins could be trotted out in time for the upcoming election with a Drugs are bad message in an effort to breath life into the cadaverous heap that is the WAR ON DRUGS policy.

As usual, Christopher Pyne is a reductionist who really should know better. Shame on you Minister.

Update: Richmond defender and president of the players’ association, Joel Bowden, said the Government’s proposals went against “all the research and all the information we’ve been given”.

What better way to sum up HoWARd’s government and the things that really have had their time, than his sexist reaction to the ALP’s IR policy.

The policy was not gender specific with regard to the Parental leave and Flexible work for parents provisions.

2. Parental leave – Federal Labor recognises that many families want to have a parent provide all or most of the care for a child during the first two years of the child’s life. A Rudd Labor Government will guarantee that both parents have the right to separate periods of up to 12 months of unpaid leave associated with the birth of a baby. Where families prefer one parent to take a longer period of leave, that parent will be entitled to request up to an additional 12 months of unpaid parental leave from their employer. The employer may only refuse the request for the additional 12 months leave on reasonable business grounds. This will guarantee that Australian working families have the flexibility of up to 24 months unpaid leave to provide care for their child.

3. Flexible work for parents – A Rudd Labor Government will guarantee a right for parents to request flexible work arrangements until their child reaches school age. Employers will only be able to refuse any request on reasonable business grounds.

“You run the risk that some employers will avoid employing women, in particular, with young children.” – John HoWARd.

What’s incredible is that HoWARd demanded an apology from the buffoon for this, but did not for a second consider the offensiveness of his own remark.

It must be time to be rid of the pre-Copernican obscurantist. 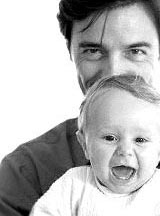 You are currently browsing the Suki Has An Opinion weblog archives for May, 2007.