There was no doubting that on a good day, the former leader of the ALP, Kim Beazley, could produce a stirring speech.

Kevin Rudd has recycled one of Kim’s gems regarding the WorkChoices legislation announcing that he will,

“Consign these laws to the dustbin of history. If you vote for a Labor government, we will get rid of them (the new workplace laws) forever and for good,” – Kevin Rudd

Kevin’s previously ‘soft’ stance on WorkChoices legislation is believed to have been changed by recent studies reporting that,

“Women and casual and part-time workers on AWAs get, on average, up to $4 an hour less than workers on collective agreements.” – Source.

A Queensland study of 300 upper to middle managers, 88% felt there should be protection against unfair dismissal. It is interesting to consider whether these managers are protecting their own jobs or those of their subordinates. I would suggest it’s a bit of both.

Professor David Peetz is an academic, whose industrial relations research is certainly worth considering, except of course unless you are everybody’s simple uncle J Ho. Thankfully, Kevin Rudd is a considerably more astute politician than the Minister for Employment and Workplace Relations.

I am not convinced that two dustbins are enough to contain the refuse that is WorkChoices legislation. I could certainly hear the phrase “consign these (WorkChoices) laws to the dustbin of history” again and again before this year’s election. 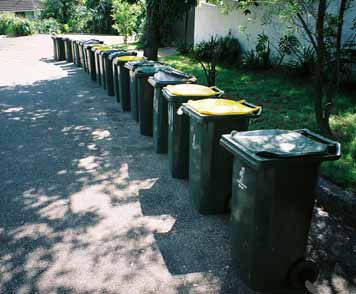 This entry was posted on Sunday, March 4th, 2007 at 11:15 pm and is filed under WurkRitesô. You can follow any responses to this entry through the RSS 2.0 feed. Click to leave a comment.