Thank you; drive through.

Last year I bought a house in the Blue Mountains of NSW.

When I catch up with people and tell them where I now live they say “Oh, so you’ve made a treechange.” I never used to say much, but lately, having been to a handful of community events and sampled my local shopping areas I flatly say “No it’s not a treechange.”

See, I have come to understand that ‘seachange’ and ‘treechange’ have within them the notion of deconstruction. The simplification of a hectic, out-of-control urban experience and the longing for the simple life. Frankly, my motivation is a lot less Jacques Derrida than that. I was, and am, motivated by the beauty of the landscape and in particular the beauty of my home.

At first I thought that I was all citified and I had to learn to slow down, but then I remembered that I am the same person I was when I lived in Darwin for 15 years. It really doesn’t get much slower and laid back than the top end of Australia.

I have come to the realisation that I am blunt and impatient in either hot or cold climates.

The final example of who I am and what I need, came last week when I attended a community forum organised by the local progress association where candidates for the upcoming state election spoke to we concerned voters residents.

We gathered, sat down and listened. Each candidate was given 15 minutes to talk, with extra time allocated for questions afterwards if needed. The independent candidate- Robert Stock, got bogged down in the minutiae of micro policies and seemed to lose himself, let alone his audience. Robert Stock was followed by the Liberal candidate Michael Paag who was big on macro, expensive rhetoric, but completely fell down when asked specific questions relating to his sweeping statements, such as “Which sectors of the state public service will the 20,000 ‘back-room bureaucrat’ jobs be cut from?”

Michael Paag was followed by the ALP candidate Phil Koperberg. Thankfully, and cheekily he said words to the effect

Having heard the Liberal candidate speak I am so impressed by what he and his government will do on March 25, 2007, that I am going to change my vote to Liberal, but I am a realist and l live in a real world…

By the time Phil Koperberg was done and the Greens candidate Pippa MacInnes stood up, I was barely able to pay attention.

To be fair, the throng and thrust that is my natural style as I push for clarity and logic in the answers to questions clearly irritated most of the polite members of my ‘new’ neighbourhood. I was reminded of a ‘girlchild saying’ where she would whisper in my ear “You can stop helping me now Mama.”

I am thankfully, SO not suited to joining my very sweet, polite, civil, but misguided local community. I am so pleased that this venture into community development is out of the way and I can now get back to the real world of broadband and blogging.

So, out of self preservation- theirs and mine, I will happily limit forays into my community to weddings and funerals. 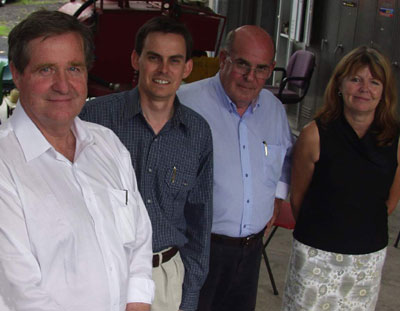 This entry was posted on Wednesday, February 28th, 2007 at 4:56 pm and is filed under Personal, Political. You can follow any responses to this entry through the RSS 2.0 feed. Click to leave a comment.

21 Responses to “Thank you; drive through.”