Be wary of OH&S bearing gifts

If someone comes into your workplace and says we are here to promote health and safety, ask to check their credentials. There is nothing safe in having a worker feel furious and embarrassed when her face appeared on television advertisements for WorkChoices and she did not agree to it.

"I was lied to and deceived. It’s been put to me that I’m just a Liberal Party pin-up girl. But that’s not me. I’ve protested against the Liberal Government. I’m into social justice." – Phelia  Grimwade.

Phelia’s statement alone tells me she is legitimate in her fury.  No one who is into social justice could possibly support our current Liberal Party.

Tom Cooper, the account manager for Dewey Horton, the agency hired by the Government to produce the ads, denied his staff had given vague descriptions of the purpose to mislead people into appearing in the advertisements.

"Anybody who participated in the advertisements signed a talent release form that stated clearly that the client was the Department of Employment and Workplace Relations and the issue was industrial relations. I can’t understand what all the confusion is about." – Tom Cooper.

The confusion Tom seems to be about the lack of details in the contract.
Something we will come to call workplace "Billying" alongside of workplace bullying. 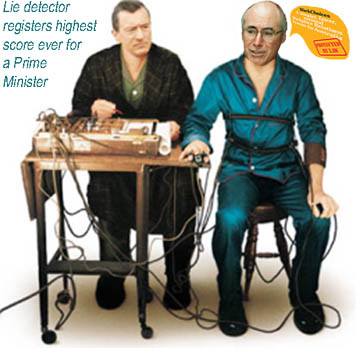 This entry was posted on Wednesday, October 26th, 2005 at 11:55 am and is filed under WurkRites™. You can follow any responses to this entry through the RSS 2.0 feed. Click to leave a comment.

4 Responses to “Be wary of OH&S bearing gifts”