The PM tells us that it is just coincidental that his announcement that Australia is facing a possible terrorist threat has been timed to avoid scrutiny of the industrial relations and counter-terrorism laws.

"Now if I had made the calculation that I’ll put this off for a few days so people won’t accuse me of that, and something were to happen, people would have every right to condemn me unconditionally." -John HoWARd

This is brilliantly circular isn’t it.  HoWARd won’t outline the specifics of the threat.  The legislation will go through because there is a threat. Naturally the threat will be averted because we have legislation to do so.  We may or may not ever hear the details of the threat and Australians will applaud him because hero HoWARd spared us from the threat being realised. Does anybody realise exactly where the threat is here? 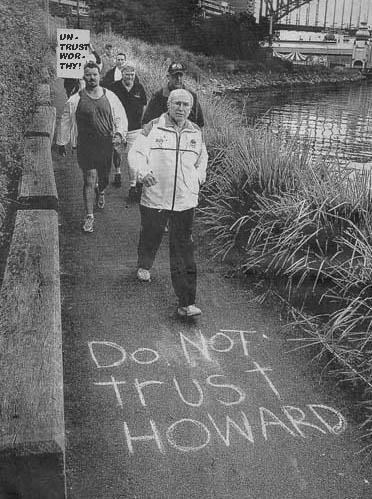 This entry was posted on Wednesday, November 2nd, 2005 at 10:56 pm and is filed under Life; barely possible. You can follow any responses to this entry through the RSS 2.0 feed. Click to leave a comment.

7 Responses to “Next few days crucial”