He threw that drug away

What does a man of god sell? Not much it seems.

I would think the minimum standard might be honesty and integrity. It is one of the reasons that a thinking, pluralistic public, such as Australia, is uneasy about allowing religion, and those that peddle it, to have much of a hold on the laws governing our society. This is evidenced in the resounding community response to banning abortion, banning stem cell research and placing chaplains in schools.

All too often religious types end up being discredited, much like the latest discredited preacher Rev. Ted Haggard. Ted, it seems has been preachin’ one thing and doin’ another. He was saying “drugs are bad” as he was buying speed. He was saying, “gays are evil” as he was having sex with a man. There you have it. Evidence versus belief.
In the US, Reverend Ted Haggard has resigned as president of the National Association of Evangelicals representing more than 45,000 churches with 30 million members.

Reverend Haggard admitted he had received a massage from a Denver man- Mike Jones, who claimed the pastor had paid him for sex over three years. Haggard also admitted he had bought methamphetamine. However, Haggard denied having sex with Mike Jones and said he did not use the drug and threw it away.

“Please continue to pray for Pastor Ted and his family, and let’s all continue to stand strong together for the kingdom of God. We will get through this together. Remember, New Life Church has never been a man, a building or anything else – we are a family.” – Rev. Ross Parsley, Haggard’s temporary replacement. 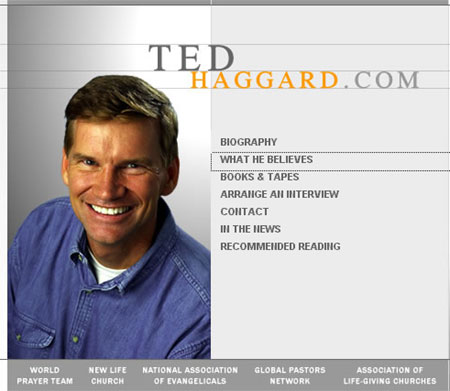 This entry was posted on Wednesday, November 8th, 2006 at 10:44 pm and is filed under Life; barely possible. You can follow any responses to this entry through the RSS 2.0 feed. Click to leave a comment.

2 Responses to “He threw that drug away”