Let’s just say that I am a Muslim woman of middle-eastern origin.  My husband and I have lived in Australia for 15 years.  We are the proud parents of a young son aged five.  Shahrdad is dark, charismatic and asks us lots of questions and we would do anything to protect our son.
We regularly travel back to Tehran to catch up with extended family and immerse our son in culture and language.

What will he have observed as the norm for him and his family by the time he is ten and the new anti-terror laws come under review? Will he think that all Australians spend anywhere up to three hours getting out of ’security’ at the airport after their arrival back from an overseas trip?  Will he learn from us that venturing out in our white van causes suspicion?
What I am to tell him of our chosen homeland when, at the sunset clause stage of these new anti-terror laws, he is 15 and he has been stopped again and again, since he was 13.

How will I explain assimilation to him when none of his ‘white’ friends want to go out with him as they are sick of getting stopped by the cops?

"[…] that a particular suburb, there’s a threat about to emerge from that, or you’ve got credible intelligence information that some group of people in a white van are going around the countryside and they’ve got explosives on board. It gives you the capacity to search any white van, for example, if you put this act into place. It gets an instant response from the police. Now the Federal Government’s not talking about that, but they should be." – Kim Beazley

And how am I going to explain the concept of an opposition to him without him laughing out loud? 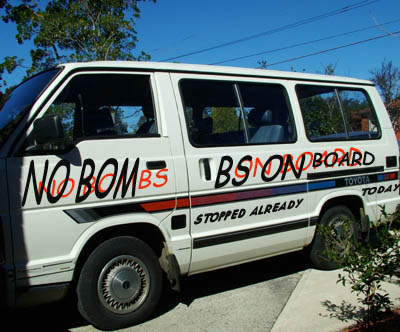 This entry was posted on Wednesday, September 28th, 2005 at 9:37 am and is filed under Political, Social justice. You can follow any responses to this entry through the RSS 2.0 feed. Click to leave a comment.

11 Responses to “Fear and hate”