Twenty years ago my grandmother in her broken English, phoned me from her home near Stuttgart in Germany. She sounded tired and was fretting that I would not be home. She called to tell me of the horror of the Chernobyl nuclear disaster and made me promise that I would never, ever buy any milk product for at least a decade- be it powdered, UHT, condensed, cheese, yogurt etc. that was not made in Australia.

Long before we, here, in Australia would hear of the Chernobyl nuclear disaster, my Oma had not only heard, but assessed that the milk products would be shunned by Europeans and offloaded to unsuspecting, faraway countries.

The girlchild- her Uhrgrosskind- was 8 months old and my Oma wanted me to know what she feared. I remain eternally grateful for her advice. I am also very appreciative that the girlchild and I live in a ‘faraway’ place. Not least of all because twenty years on the situation in the Ukraine is still horrific. 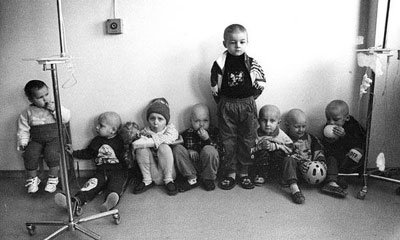 This entry was posted on Wednesday, April 26th, 2006 at 10:56 pm and is filed under Life; barely possible. You can follow any responses to this entry through the RSS 2.0 feed. Click to leave a comment.