Tuesday is ANZAC day. A day where many Australians honour the men and women who laid down their lives to make this country free.

This year the Victorian RSL is giving official permission to the descendants of WWI Turkish soldiers to join in the march of veterans. The Victorian RSL President, Major-General David McLachlan says,

“the Turkish were a very honourable enemy.”

On the same day, Veterans who feel that the Department of Veterans’ Affairs has abandoned them and their claims for acknowledgement of their PTSD, and compensation for their PTSD, have been told they cannot use the day to highlight their frustration by wearing an orange armband.

What is the message being sent to Australians? Is the right to march as a veteran only reserved for those that don’t challenge the ANZAC story of honour, bravery, sacrifice and compliance? Or are we as Australians mature (and honest) enough to have the discussion that might be-

“War can physically and psychologically injure our Soldiers, Sailors, Airmen and Airwomen.”

Recent polls would suggest that Australians are not as sympathetic to the Iraq cause as they once were. Australians are also not voting with their marching feet as they walk past military recruitment centres around this country.

NewsRadio mentioned an Australian Soldier ‘incident’ in Iraq this morning. I will continue to search the news to find the story.

Whilst, of course, I hope for an end to the deaths in the war in Iraq, I know this to be impossible as the reality is that people are still dying daily.

I wonder how many ‘hurt’ Australians it will take for this government to feel the backlash?

I wish the orange armbanders nights of sleep with only one nightmare. 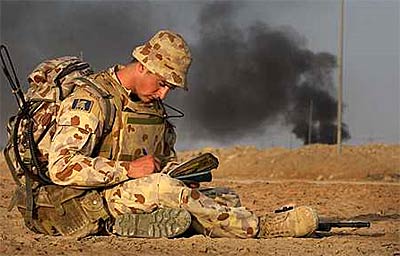 This entry was posted on Saturday, April 22nd, 2006 at 10:20 am and is filed under Anti-war, Political. You can follow any responses to this entry through the RSS 2.0 feed. Click to leave a comment.