Browsing the news today I came across this article. 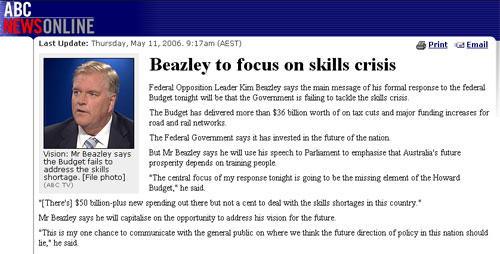 Instantly I smiled as I thought it referred to his skills crisis. Finally, I thought, he is realising that as Mr. 37%, he is woefully unskilled as a future Prime Minister and more importantly- unelectable.

Sadly, there is no such story. Instead it’s a piece inviting me to listen to the Labor party’s response to the budget.

Dutifully I listened- then very quickly wandered off. In my under whelmed state I went searching for something of substance from someone of substance. My search took me to the ABC’s 7.30 report from 8 May 2006, where in a recent interview Kerry O’Brien and former Labor Prime Minister Paul Keating meet. Whilst I am aware that the majority of Australians were not saddened by Paul Keating’s demise in 1996, I was. Once I had distracted myself from fantasising about a Kerry and Paul boy-sandwich, and I read the transcript, I realised why I can’t abide the feckless Beazley. Compared to lichen and lint he comes across as insipid and uninspiring. I want a Labor leader who has leadership qualities and can manage presence and passion.

I need a leader (and a party) who will not be frightened by the coalition’s campaign against them. Someone who can convince Australian voters that they can vote out the mendacious HoWARd (or Costello) government and it will be the right thing to do.
This is what Paul Keating’s advice is:

I know Keating is gone. But why not Julia Gillard? She’s a talented politician poised and primed for consideration of the ALP leadership.

Please, anyone, but the bomb- Beazley.

This entry was posted on Thursday, May 11th, 2006 at 11:54 pm and is filed under Political. You can follow any responses to this entry through the RSS 2.0 feed. Click to leave a comment.