Looking for the bad guys

Today’s Courier Mail has an article about the Australian military casualties of the war that is the invasion of Iraq.

When we think “casualties of war” we often think of physical wounds- wheelchairs, scars and missing limbs. Forgotten and less visible casualties of war are the many Iraq veterans who are suffering from mental health issues. No prosthetics or empty trouser legs neatly pinned up out of the way for these men and women. What they endure, whilst not so obvious, is just as pervasive as a physical wound- involving gaps in cognition, coping, memory, connection and hopefulness.

The article states that approximately 6000 ADF troops have served in Iraq since the US-led invasion in 2003, and 52 have since been discharged with mental health conditions ranging from anxiety and depression to Post-Traumatic Stress Disorder (PTSD). Just imagine, 2 out of every 250 military personnel deployed to Iraq, in a period of 0-3 years after their return home, will end up having such a severe mental health issue that they will be classified as medically unfit and discharged from the ADF. No more military career.

The ADF will no doubt blame many factors other than the member’s deployment experience in Iraq for a veteran’s anxiety and depression diagnosis, and perhaps this can be justified. But what obfuscation will the department of defence attempt to dismiss the connection between the Iraq war and the prevalence of PTSD in its Iraqi veterans cohort? Unless a person has been raped or in a serious motor vehicle accident, then war is the most common cause of PSTD. Moreover, anxiety and depression have been shown to be co-morbid with a PTSD diagnosis. So, to knowingly deploy someone to Iraq who has/is suffering from anxiety and depression is negligent and may be actionable. The military is not caring for, or taking responsibility of, the mental health of its people.

I have a relative who voluntarily discharged from the army as soon as he could after the invasion of Iraq. He tells me he wishes that the army had lost him as well as they had found him which covers a period of a decade. He is in private practice and he knows a lot about Subjective Units of Discomfort Scale (SUDS) as he treats ex-military survivors of traumatic stress syndromes.

“I have no idea how what happened in Iraq did this to me, but I know I am not the same person I was before I went over. We lived, slept and breathed a highly stressful environment for six months. When I returned to Australia I was driving down the road looking for the bad guys – you start to realise how close to death you were.” – Gordon Traill.

Members of the ADF are still compliant, however in the UK, those that are refusing to kill are active and mobilised.

ADF chief psychologist Len Lambeth said the military “would be silly” to expect every soldier deployed to return home perfectly well. He said the rate of mental illness would be unlikely to decrease.

In the future refusing to obey lawful orders may be more successfully argued as a right to not be exposed to a psychological injury. 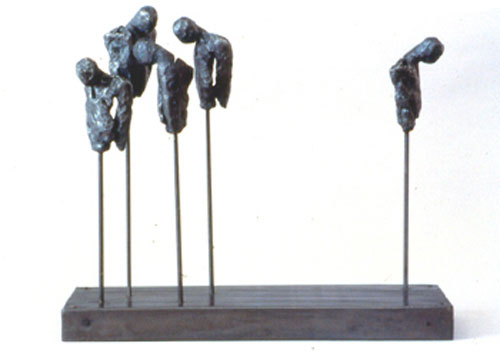 This entry was posted on Saturday, May 20th, 2006 at 5:56 pm and is filed under Anti-war. You can follow any responses to this entry through the RSS 2.0 feed. Click to leave a comment.

8 Responses to “Looking for the bad guys”