Just when the Defence Force Ombudsman states that the Department of Defence has improved the way that it handles grievances, reflecting a new level of maturity in the ADF, we read of “Gilly from Timor” an artillery officer, who sent an open e-mail detailing his impressions and movements whilst (and presumably – still) on active duty in the Australian Army in Timor.

He describes his infantry comrades as “dumber than I thought”. He says of his RAAF colleagues that they are “jack pricks.”

Responses from fellow enlisted people to Gilly, reveal a similar culture of disproportional, base responses.  These have been swift and blunt with comments such as:

“It’s good to see another fine product from ADFA is getting his moment in the sun. I hope those blokes from 1RAR who were such a hindrance to you appreciate the fine, three year taxpayer funded holiday you went on in Canberra made you the tactical genius you appear to be.”

“This bloke should be broken like a shotgun and horsef…ed.”

The ADF is spending tens of thousands of dollars on recruiting young people into their ranks. They advertise heavily in magazines that attract a young demographic. However, I doubt even the most immature teenager would not see the culture displayed by the four ADF members above for what it is – Puerile.

“I firmly believe the Services offer a fantastic range of career opportunities for young Australians, and every ADF member needs to convince others to join us.” – Director General Defence Force Recruiting Brigadier Simon Gould.

Obviously the Brigadier is just another aca-fucking-demic from Canberra. 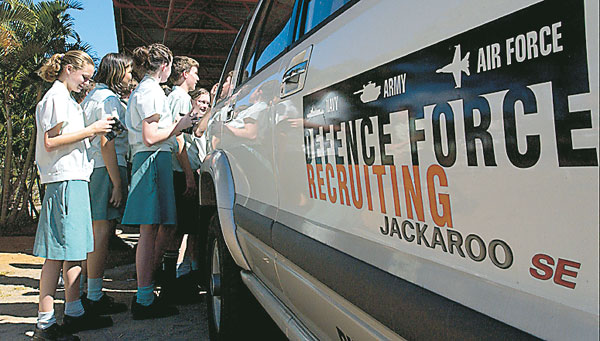 This entry was posted on Monday, June 19th, 2006 at 11:25 pm and is filed under Anti-war. You can follow any responses to this entry through the RSS 2.0 feed. Click to leave a comment.