Why would the Health Minister oppose a health response that reduced the need for surgery?
Because he operates on, and is informed by belief.
When Tony with his belief-based views comes in contact with evidence which does not feed into his belief, that evidence is dismissed, diminished or ignored.
Evidence becomes the enemy and so do those that bring it or advocate for it.

Tony Abbott should be removed as Health Minister for allowing his beliefs to override evidence. And in so doing, he rejects outright one of the least invasive health choices available to Australia’s women (and the men who support them) who have experienced contraceptive failure. 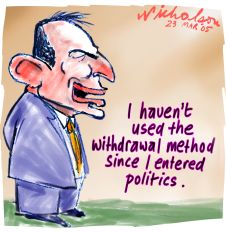 This entry was posted on Monday, September 12th, 2005 at 10:04 pm and is filed under Pro-choice. You can follow any responses to this entry through the RSS 2.0 feed. Click to leave a comment.