"I just got a letter from a nice woman who told me the man I sat next to on the flight from Auckland to Goldcoast Australia reported me to the Australian Government because of the book I was reading."

This is what alert and alarmed wrote:

"I hope this finds you before you leave Australia as I think its something that won’t surprise you but might give you a smile when you are sitting in a hotel room. I work in one of those Government areas that deals with anti terrorism matters. A fine service is provided but unfortunately we get to read a lot of things submitted by lunatics. The Australian Government set up the National Security Hotline to report terrorists.
The person who sat next to you on the flight from New Zealand does not agree with your politics or choice of reading and so nominated you as a possible threat. As they were too cowardly or stupid to leave their details I can’t call them to discuss their idiocy with them."

"Interesting that he and I exchanged nothing but polite hellos. I was reading Ahmed Rashid’s book Jihad: The Rise Of Militant Islam In Central Asia. He’s a correspondent for the Wall Street Journal and the book is on the Yale University Press. Didn’t Bush drink beer at Yale? Didn’t he not seem to learn much at Yale? Of course I wrote the nice lady back."

In a letter to alert and alarmed, Henry wrote:

"I was reading a book called Jihad by Ahmed Rashid which is a history of Central Asia. I didn’t speak to the man next to me past how do you do. I think Ahmed Rashid is published by Yale University Press. Bush’s alma mater. Please tell your government and everyone in your office to go fuck themselves. Tell them twice. If your boss is looking for something to do, you can tell him I suggest he go fuck himself. Baghdad’s safer than my hometown and your PM is a sissy. You have a nice night."

I hope my copy of The Assassins Gate: America in Iraq by George Packer arrives in time for my next plane journey. If not, I’ll re-read Andrew Wilkie’s Axis of deceit.

HoWARd’s Australia- Read a book and draw attention to yourself. 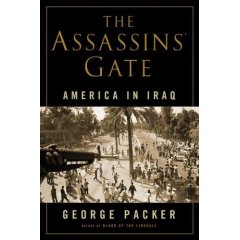 Posted in Welcome to my country | 10 Comments »

A group of us have just returned from Harmony in the Park at Belmore park in Sydney.

It was an uplifting, peaceful afternoon amongst 3000 like-minded people, with my personal favourite highlight being a passionate speech delivered by Rowan Wood. 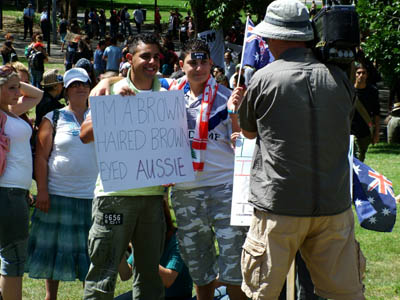 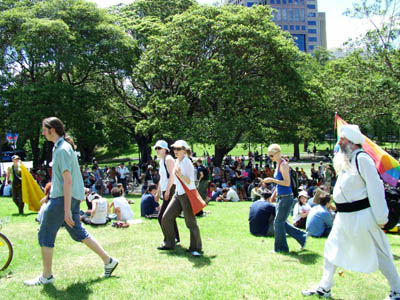 END_OF_DOCUMENT_TOKEN_TO_BE_REPLACED

Posted in Welcome to my country | 5 Comments »

"But I’m not going to put a general tag [of] racism on the Australian community, I do not accept that there is underlying racism in this country." – John HoWARd.

Really. Even in the wake of one NATION™‘s  popularity. The findings of the Palmer report. The hatred of middle-easterners. Issa’s harrowing experience where the mob accused him of having a bomb.

As someone who is other (although born here), has antecedents who are other, lives with people who are a different other – I disagree.

This event has shattered Australia’s idyll. I now understand my father’s protection (and fear) for us.
I wonder where/if this will end? Or will we always have the fear of this racist violence being just behind the next wave. 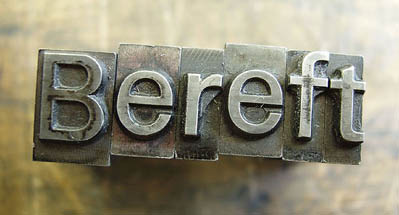 Posted in Personal, Welcome to my country | 10 Comments »

Getting out to young GetUps. Idea #2 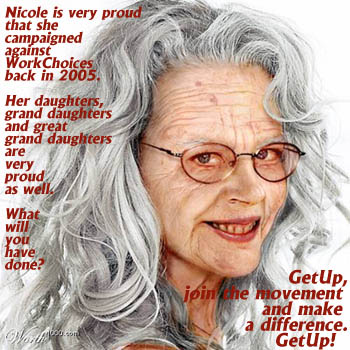 Getting out to GetUp

I went along. There were less people than I would have thought could be attracted to a movement such as GetUp in Sydney.  Admittedly, we were half an hour late and yesterday was an unseasonably grim, rainy night.

What surprised me was the age demographic. The GetUp team were the youngest people in the room by decades. The where-are-the-youth theme informed my entire evening. We listened to David, Jeremy, Toby and Lachlan.

Coming in late, I’m not sure what we missed, so by the time we were broken into groups of eight to brainstorm ideas for making GetUp bigger, better and faster, my contribution came down to ways of engaging youth in the alternative political debate. I have grand desires, but few ideas.

Inspired I take it upon myself to do some qualitative research.  I seek out the 20 year old girlchild.  For the 2.3 minutes that I had her attention she tells me that,

"Placards and protesting and feminism and left-wingedness is just so 80’s…Young people don’t care mama."

"Why don’t you care? What has to happen for you to care? What would radicalise you?" I ask.

Girlchild’s answer, "Can I use your car?"

It’s about getting their attention.  Now how do we keep it? 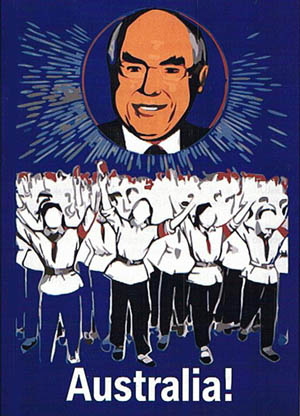 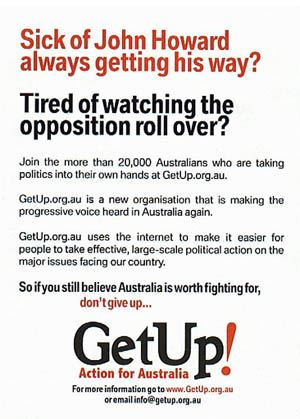 You are currently browsing the archives for the Welcome to my country category.